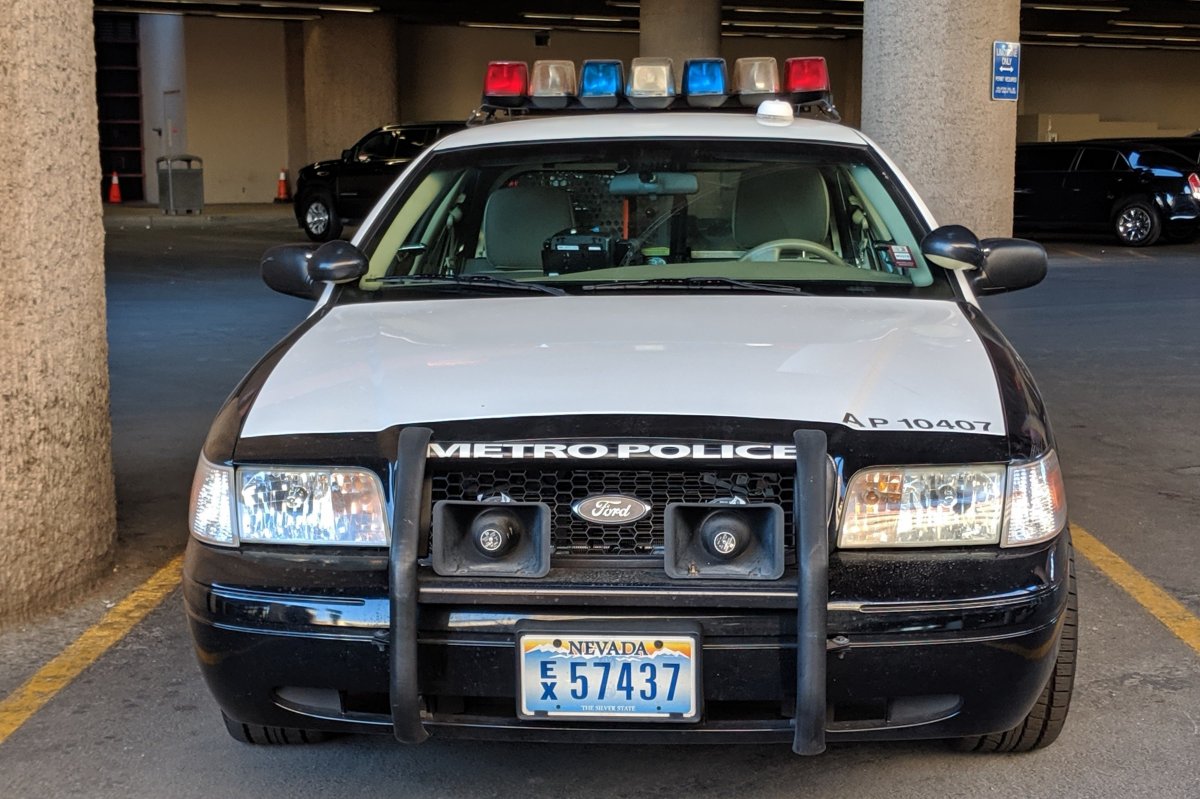 For an eight-hour shift, I accompanied a Las Vegas Metro Police Officer on his shift.  During this ride-a-long, we responded to the following:

* Report of a dead body in a home

* Arrest of a man who jumped over a residential fence

A few notes about these incidents:

Report of a dead body in a home – We were met in the driveway of a residence by a man apparently in his thirties.  Decedent was in the home and in his mid-fifties.  The man in the driveway informed us that the decedent had contracted COVID five days prior.  Ordinary procedure would be for an officer to enter the house and evaluate the scene of death, but since this was reported COVID, we left the scene without entering the house and placed the investigation into the hands of the coroner.  The officer maintained a calm demeanor and did his best to comfort the person in the driveway.

Arrest of a man who jumped over a residential fence – Metro received a report of an individual climbing over residential fences or walls and approaching homes.  When we arrived on scene, a person was already handcuffed and being interviewed by other officers, under the observation of the Sergeant.  The person in handcuffs was a black male in his twenties.  While he was unarmed, he was physically well built, and the sergeant observed that the man in question could likely physically overpower any of the officers on scene except one (who had an MMA background).  Observing the man detained and the officers, that assessment made logical sense to me.

The officers were able to detain the individual for questioning under the concept of “reasonable suspicion”, based on observation of his activity when they arrived on scene.  Based on their evaluation of risk, they may restrain the person being detained using handcuffs, even if the person is not under arrest.  In this case, the detainee resisted the handcuffs, which elevated the case from reasonable suspicion to probable cause regarding the resistance.  This probable cause gave the officers the right to search the person for weapons.

In this search, officers found the man was unarmed, but had about a dozen individual keys in his pocket, none on a ring of any kind.  Of these keys, about eight appeared to be house key, two appeared to be auto keys, and two others were for padlocks.  There was also paper that is commonly used for wrapping methamphetamine, although there was no narcotics found on the person.

I was informed that this is something that Metro has seen before.  The man being detained was likely sent by a professional burglary ring, trying to see if any of the keys could get locks open and where they would work.  If he was successful, he would not be taking anything, but rather reporting the location and the lock that would open.  He was likely paid in methamphetamine, so there is no money trail and no real crime of which he can be convicted (besides initially resisting the officer trying to handcuff him). Officers understood there was virtually no chance that the man would disclose where he got the keys or who he was working with, and basically did not have many options to arrest him.  They did make the decision to bring him to the station and book him for resisting an officer, which seemed to be the only choice versus letting him continue doing what he was doing.

In observing this interaction, there seemed to be a level of professionalism involved.  The detainee knew he couldn’t get in much real trouble, and the officers, even though they understood what he was doing, did not have enough to arrest or incarcerate him for much of anything.  While I didn’t see the first officer on scene handcuff the man, as I arrived after he was in handcuffs, there did not seem to be any escalation or aggressive behavior from either the officers or the detainee.

Upon driving away, we encountered a vehicle stopped at a light with inoperative rear brake lights.  After the light turned green and we crossed the intersection, the officer turned his lights on and stopped the driver.  Approaching the vehicle, the driver was a Filipino woman in her fifties who was under five feet tall.  The woman was clearly nervous about being stopped and what would happen to her.

The officer returned to the vehicle and ran her plates and license, noting no outstanding issues or prior history with law enforcement.  When he re-approached her vehicle, she indicated that she did not know her brake lights were out.  The officer made the decision to not write a ticket, indicating that many drivers don’t know when their brake lights stop working and he frequently does not write tickets with the understanding that the driver often didn’t know.  The woman was relieved to not get a ticket, and everyone went on their way.

I asked the officer if he had a quota of tickets for the month, and he indicated that regular Metro officers don’t have quotas, only traffic enforcement.  He indicated that there was no pressure on him to write a certain quantity of tickets, and that aside from DUI, officers have total discretion on whether to write tickets.

There was an unusual looking call, where the monitor told us that there was a male attempting to pick up property from his ex and the police were called to verify peaceful turnover of the property.  Running prior records, the person in question had numerous domestic violence and robbery charges incidents on his record.

When we arrived on scene, the person in question was not on scene, but his ex was outside and trying to call on a mobile phone.  She indicated that there had been an argument, and her ex grabbed her work cell phone out of her hand and took it with him.  While she was talking with the officer, she was making multiple calls to his cell phone from her personal phone.  When he finally picked up her call, he denied taking her phone, saying she must have dropped it in the bushes.

While both the officer and I had our suspicions of where the phone might be, there was little that could be done to verify those suspicions.  The officer went through the process of writing up a report on the missing phone, for the woman to take into the retailer and get another phone.

In the discussion, the woman indicated that her ex was physically violent with her in the past.  The officer inquired as to whether any of the physical altercation happened today and was told it was all in the past.  The officer did offer the suggestion that the woman remove herself from that situation and offered the contact information of SafeNest if she was interested.  The woman did not wish to pursue this option any further.

This was the only interaction of the day where a social worker might have been a viable alternative.  Regardless, the police officer was empathetic in listening to the woman’s story, and he seemed to be trained on domestic violence and the available options for victims.  He really did try to get the woman to say that she would not continue to live in that kind of relationship.  Regardless, as the domestic violence did not happen that day, and the woman was not interested in pursuing shelter or asking for protection in case her ex returned to the house, the work of the police was done with the filing of the incident report on the missing mobile phone.

A woman called and reported an angry interaction with another motorist, where the motorist drove by her and waved something she though was black…. possibly a gun.  She lived in the area and estimated returning home in a half hour, asking that police sit and wait for her so she could file a report at her home.  As she did not report being in imminent danger, police instructed her to call when she arrived at her home and was ready to file the report.  The woman did call again when she returned home, and the call was answered by another officer.

A girl appearing to be about eleven years old called and said that her mom was in argument with her dad, and angrily took pills, drank alcohol, and made some nebulous comments about not wanting to be there anymore, and Mom was currently unresponsive.  911 dispatch had labelled this call as a potential suicide.

When we arrived on scene, Mom was lying in bed and was aware that her daughter had called 911.  She indicated that her medication was normal medication that she took regularly as prescribed.  The alcohol was two prepackaged banana shooters, which we knew was not likely to cause a life-threatening situation, even if the daughter did not realize that.  Woman was very expressive in sharing her thoughts about her current boyfriend, but he wasn’t home and there was no evidence of violence.  My observation was that officers empathetically listened to the description of the argument and the woman’s summary of her relationship.

While officers were in the room talking to Mom, Fire Department paramedics arrived responding to the same call.  Between the officers, the paramedics, and myself as an observer, there were seven people in the house, all wearing masks.  The residents were not wearing masks (especially Mom, who thought she was going to sleep only to have her daughter call 911).

The daughter, upon looking at all these adult men in her house wearing masks, asked one of the firefighters if she had to wear a mask too.  The firefighter shrugged his shoulders, gave her an exasperated look, and said “who knows any more”.  I did notice that there seemed to be a growing amount of impatience among the first responders that I interacted with as far as what is and is not required surrounding masks.

Nonetheless. I was not happy with the firefighter sharing his exasperation with an eleven-year-old girl.  I took it upon myself to address the girl, telling her that this was her house, all of us were wearing masks because we respect her house, but we weren’t going to make her wear a mask inside her house.  She should only get a mask if she felt it was necessary for her.  This gave her a little bit of comfort, and she did not go find a mask.

When police were done questioning her mom, the girl went to her mom’s room, and we stayed long enough to make sure that Mom was not yelling at or verbally abusing the girl for calling 911.  Once we saw that, we left the home, and our shift was over.